With the last three winners of the Junior Tour having finished as the leading first year in the previous edition, and with such a strong group of young riders lighting up the BC Road Series, we thought it high time they had something to fight for that is just for them.

We are pleased to announce the 2015 NFTO Junior Tour of Wales Best Young Rider competition – and the Blue Jersey. It will be awarded to the highest placed rider on GC who was born in 1998, and will look a lot like this: 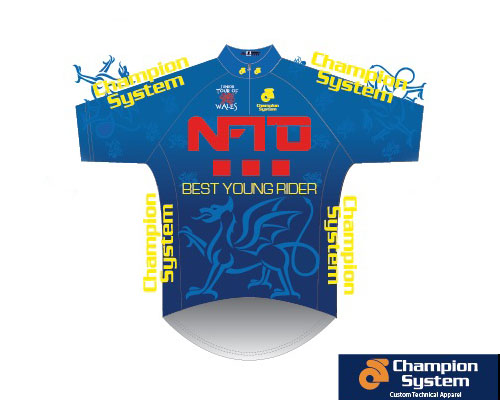 Had the jersey been in existence last year, it would have gone to Cheshire on the back of the HMT Academy’s Alex Braybrooke, who finished a very strong second to Eddie Dunbar. Alex returns in 2015 with that experience under his wheels, and the honour (or pressure!) of race number 1 as his reward. He’s well set after a series of strong performances in European stage races, and with a contract with the Lotto-Soudal development team already in the bag. As the effective reigning Best Young Rider, he’s taken some time out of tuning up for #JTW15 to give this year’s gang of first years a flavour of what to expect:

Thanks Alex, Christian and the team – good luck! Thanks too to NFTO for sponsoring the Blue Jersey – and to Champion System UK for another great design.

So the big question is, with so many quality first years in the field, who’s going to be wearing blue on Monday afternoon???