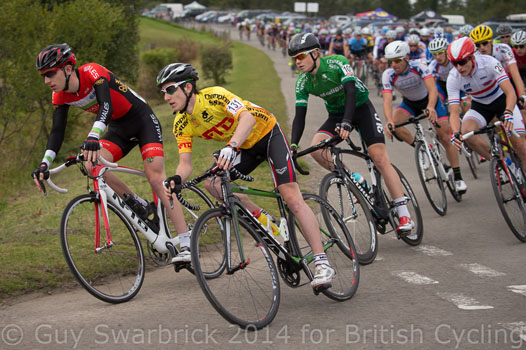 Ireland’s Eddie Dunbar saw his junior career off in style after dominating last year’s Junior Tour and finishing with the biggest winning margin in the event’s history*.

Having finished fifth in #JTW13 – at one stage tasting virtual yellow after a courageous early attack on stage 5, Eddie, again riding for Munster, made no mistake in 2014. Starting with a solid fifth place on the opening time trial, he unleashed a tumultuous attack on the stage 2 finale up Llangynidr Mountain, putting nearly three minutes into a bunch led in by the promising Alex Braybrooke.

After finishing serenely in the bunch on stages 3 and 4, he again let his climbing legs loose on the Tumble, winning the final stage and in the process building his lead to 4:51 over Braybrooke, whose own ride – to second place as a first year junior – marks himself out as a major talent. He will be one of the riders to watch this time.

After turning pro for the NFTO team, Eddie carried on where he left off, right from the Severn Bridge Road Race in March. A storming ride in the Tour de Yorkshire even got him the unique honour of winning a jersey from a hospital bed – after crashing and breaking his collarbone.

Since then he’s been back to the Tumble – ripping it up at the Velothon Wales Pro Race, and has added the Irish Under 23 Road Championship to his rapidly growing palmares. He’s clearly going to go on to even bigger and better things. And he’s got some words for this year’s riders too:

“I’d like to wish all the riders the best of luck in this years JTW. It’s a great race to take part in! It was one of my favourite races that I did during my Junior career and I’m proud to say that I won the JTW especially with the history it has.”