Caldicot-based SD Sealants & Cosmetic Repairs has been involved with cycling in Wales in since 2012. As well as a continued sponsor of the Welsh Cycling Awards, SD Sealants also supports two young Welsh cyclists, Scott Davies and Amy Roberts.

As a keen cyclist himself, Nick Jones, Director of the UK’s leading sealant specialists has been enthusiastic in showing his commitment to the sport.

Nick said: “We jumped at the opportunity to support the Junior Tour of Wales, recognising the important role it plays in the development of promising junior cyclists. There is a lot of cycling talent in Wales and it is great that young riders have the opportunity to compete in such a prestigious competition.”

With a network of offices across the UK, SD offers true national coverage by using a group of local sealant operatives to carry out specific projects. SD regularly works with a wide variety of well-known construction companies including BAM, Balfour Beatty, Willmott Dixon, Mace, Sir Robert McAlpine and Morgan Sindall. 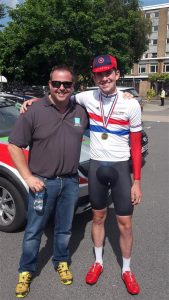 Race Organiser Richard Hopkins said: “We are delighted to welcome SD Sealants as the race’s new title partner. They are already a big supporter of cycling in Wales, in particular via their support of Amy Roberts and Scott Davies. They are two of Wales’ brightest talents and it is great to see a company with the vision to help them on the most important steps of their professional racing careers.

Scott won the Junior Tour of Wales in 2013, so we are well aware what a great rider he is. Now SD Sealants are helping 100 of this year’s best juniors follow in his wheeltracks.

The company have stepped in to support the event at very short notice when its viability was under some threat – but are now helping us make this year’s edition the biggest, and hopefully the best ever. Thanks to their support we’re able to put on longer, tougher stages which will test the riders to their limits. We can’t wait for the race to get going.”